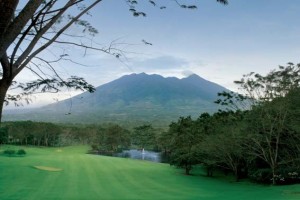 Rancamaya – Hole #10 with Mt. Salak in the distance.

Rancamaya was the source of one of the more important lessons early in my career, a philosophical approach to design called “running the river.”  However, before I continue on that topic, I would like to take a moment to acknowledge the passing of John Chapman a few years back.  John was the land planner on Rancamaya and the reason we became involved in the project. When my father indicated he was tired of traveling and did not want to take on a project in Indonesia, John replied in his gruff gravelly voice, “Let the kid do it.”

John and I had the opportunity of working together on several projects during the nineties and he was truly one of the “old guard.”  There was a large flat table in his office lit from below that had to be seventy or eighty square feet in area. Everything he did was drawn by hand.  On one large project located in Nevada, he drew over 10,000 lots to scale on a single sheet measuring about 6×10 feet. It was a work of art as much as it was a land plan.  He will be missed.

During the early nineties, there was a significant design trend I like to call “hard sells.”  Many courses were built that simply got progressively harder through each of the eighteen holes until the golfer was left exhausted and mentally spent.  Many designers seemed to leap frog over each other in an effort to make their layout ever tougher.  In my view, one of the principal reason for this trend stemmed from the golf magazines, who just a few years before, had begun ranking courses as the “Best of.”  The reviewers were generally good golfers who would naturally gravitate to a recent tough design because it offered greater challenge.  The ratings then reflected this bias by implying tougher is better.  Of course, the designers then responded by making things tougher in an effort to be recognized.  And, of course, the golfer responded by having to play the next great thing as featured on the newsstands.

When I jumped in on Rancamaya, my first tendency was to give it teeth (after all, I was not immune to the factors spinning around me) and I was promptly wacked up side of the head.  “Rating golf courses just because they’re hard,” said my father, “makes about a much sense as rating ski resorts entirely upon the toughness of their expert double black diamond runs.   While those type of facilities may appeal to the top 2-3%, all you’ll do is beat up the average guy and he’ll hate you for it.”

If you are getting the idea my father hated the “hard sells” trend, you would be right.  One of his favorite anecdotes was a conversation he had with Dave Stockton, who was a friend and neighbor during the construction of North Ranch in Thousand Oaks, California:

“Why don’t you make things more of a challenge from the back tees,” asked Dave?

“How much did you pay to play your last round,” my father replied?

“Nothing.  I don’t generally have to pay.”

Well, then!  Why would I design it for you?

Of course, I wasn’t there for this exchange, so I cannot attest to its accuracy, but you get the idea.  Simply put, my father believed one should design for the intended audience and not the occasional rater or player that might only visit once.  If one wasn’t buying a property, signing up for a membership, or otherwise paying to play, the opinion didn’t count.  In his view, the concept of harder is better was flawed because it missed the audience….and missing the audience was bad for the project and bad for golf.   “A golf course should not be like climbing a mountain, it should be like running a river.”  (Well, it has certainly taken me long enough to get around to the original topic).

Growing up, I had the opportunity of rafting down several of the rivers here in the western United States: the Salmon, Green, Colorado, and Kings.   In each instance, the journey is not consistent.  There are stretches of smooth placid water punctuated by rapids that can be rated in severity on a scale of one through five.  As one approaches a rapid, it’s class would be known in advance; a class two might consist of gentle ripples whereas a class four might be rough enough to toss one out of the boat if care are skill were not exercised. One Spring trip down the Kings River during high water, I watched a class three rapid fold a ten-foot rubber raft in two. When the raft sprang back, all six occupants were catapulted into the river (all were recovered without incident).

The analogy made total sense – the holes on a golf course should vary.  Some should be easy offering a period of calm, others should challenge in various degrees of difficulty and the two should intermix to provide an experience that is constantly changing.  I vividly recall one section of calm water on the Green River, which leads to a set of class five rapids.  The area could not have been more leisurely or placid, but the anticipation of what was coming made it hugely exciting.  Can golf courses be the same?  Sure, and they should.  Picture the sixteenth hole at Pebble Beach and the short three-par that proceeds it.

The other aspect of this thought process is to set the highest degree of difficulty to a level consistent with the audience.  A river, or section of it, is assigned a class of one through five corresponding to the highest class of rapid to be found on it.  While the average person might have great fun navigating a class three river, doing the same on a class five stretch might well be terrifying. For the same reasons, a local public course with it’s difficulty peaking at a level of three might be the perfect test for the average player. On the other hand, a private facility loaded with scratch players might find class three to be a bit timid, whereas setting the peaks at class five might be just the thing.  In either instance, however, varying the experience is of principal importance.

These early lessons of pace, flow and designing to the audience were certainly employed at Rancamaya and have played significantly in every project since.  If recent awards are any indication, it is gratifying to note that running rivers may well provide interest and enjoyment well after climbing mountains has become tiresome and dull.