By Ted Robinson on February 5, 2013 in Blog, One Architect's Opinion

It was 1998.  Sahalee Country Club, always highly regarded and my father’s finest work, was proudly playing host to the PGA tour Championship that year.  We had flown up for the event and had chosen a quiet moment to walk the site.  I had seen Sahalee under construction as a child. It had been a rainy day and the newly cleared site was muddy, however, my strongest memory was the fog rolling through endless pines.  On this day in 1998, the fog was gone, the sun was glorious, and the pines were  as resplendent and populous as I had remembered.  As he recounted:

“The construction budget at Sahalee (#3 East Course, left) had been limited and we had little ability to change much of anything.  Once we had figured out the routing and had staked the greens, tees and turn points, we removed the trees in a ten feet strip each side of the centerline. We adjusted the stakes and then removed the trees to 50 feet of the revised center being careful to preserve any particularly nice specimens. Once again, we adjusted the centerlines to better conform to the landform and took particular note of any natural features that might allow us to better locate the greens. Only then did we finish clearing. There are certain areas I would have liked to change somewhat, but the budget didn’t allow it.”

Sahalee is minimalism at it’s finest.  Interestingly, the original plans are about as spartan and non-detailed as one could imagine, only centerlines and a vague suggestion of green design or bunker location.  The process used for clearing and re-staking remains in our specifications to this day and has been used in the same fashion on other projects such as La Iguana in Costa Rica. However, it was his last statement I found interesting – minimalism was not an objective choice, but a requirement.

I’ve been reading a book recently by H. S Colt titled “Some Essays on Golf-Course Architecture.” Colt was specific in wishing to insure the use of any natural land form to its best advantage and felt seaside courses offered the opportunity of finding natural golfing ground.  He cautioned the art of design should not trump nature. However, he also admitted many players did not have the time or inclination to travel to these courses and that other facilities were needed closer to towns or cities on sites that might not offer the same natural advantage.  In those situations, he appeared to have little hesitation in modifying the land to create both interest and challenge, even if it wasn’t his preference.  Granted, the tools (and budgets) of the day did not offer the opportunity of changing much,  but the idea one might not modify the land to insure a satisfactory solution did not seem to be a consideration.

In both of these instances, minimalism was not so much of a defined objective as it is a response to the the opportunities and constraints of the site. If the natural features on the site were conducive to good golf, then by all means, they should dominate; however, neither architect would hesitate to make changes if changes were warranted.

In a previous post on minimalism (which can be accessed by clicking here), I mentioned an event in Australia with a group of golf course architects from Europe, Australia and North America called the “Search for Mackenzie.”  The routing and bunkering plan for New South Wales (NSW), one of the courses we played during the tour, was determined by Dr. Alister Mackenzie in 1926; however, the course was subsequently completed by E. L. Apperly a couple of years later. 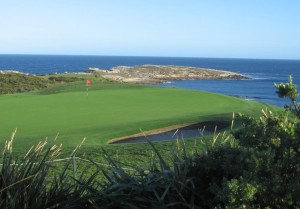 NSW is highly regarded and, in many cases,  deservedly so.  The routing takes great advantage of it’s coastal orientation and elevation change (right, the 13th green looking toward the 6th tee) to produce a layout regarded as one one of the top courses outside of the United States and British Isles.  However, for my taste, I found a few too many distractions to really  warm to it.   There are a couple of blind shots off the tee and one too many fairways requiring the golfer to hit into the slope just to keep the ball in play.  While many of the holes are really great, others seemed  to lack finesse.

So, if given the chance, would I change it?  Simply put, no!  NSW has a long established reputation despite what I might consider it’s foibles to warrant changing it unless safety or another core concern demanded a modification.  However, the more interesting question is whether I would have made corrections had I been in Apperly’s shoes and had both the tools and budgets available to me.  You bet!  If a willingness to change the land form rather than being a slave to minimalism makes me an anarchist, then so be it!  More importantly, knowing both MacKenzie and Colt disliked blind shots off the tee (although a blind approach was not a problem if the player was given a change to determine distance and strategy) and understanding their focus on finesse, I suspect they both would have been willing to do the same.

As a Golf Course Ages – Greens