This last October, Golf Magazine, Korea published its rankings on all the new golf courses built in Korea.  Whistling Rock was selected as the “Best New Course for 2012.”  This is a bi-annual award in Korea recognizing the best of fifty projects opened during 2010 and 2011.  A listing of the top ten facilities as reported by the magazine is provided below.

When I see the names of architects listed as they are here, it conjures up images of Jackson Pollock, alone, slathering paint over canvas in an old shed in the middle of nowhere.  Well, the initial design may begin as a solitary exercise (in the middle of the night, sometimes), but it certainly does not end that way.  Good projects are a team effort that begin with a developer with great vision.  In this instance, Chariman Lee of Taikwang and President Kim of Donglim are most responsible for Whistling Rock becoming a facility for which everyone can be proud.  Francine Houben at Mecanoo, Ken Alperstein, David Fisher and the group at Pinnacle Design, and so many other contractors, shapers, staff…..well, you get the idea. While I’m greatly pleased Whistling Rock has been so acknowledged, I am just as pleased to be able to acknowledge the efforts of many, many others.  So, on behalf of everyone involved (with the understanding a picture is worth a thousand words), let me close by saying….. 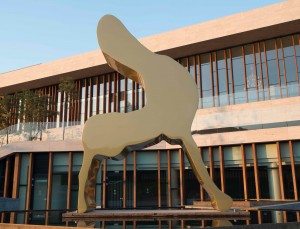