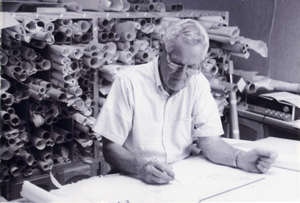 Ted Robinson graduated from the University of Southern California in 1948 with Master of Science degrees in Landscape Architecture and Land Planning. He began his career as a land planner while teaching at USC. After several years of experience designing parks, subdivisions, roads, streets and other land uses, his focus shifted to the design of golf courses and their integration within these uses. In the early 1960s, golf course architecture became the dominant activity and remained his primary interest throughout his life.

During his career Ted Robinson has designed over 160 golf courses throughout the world. Honors included the selection of Sahalee Country Club in Redmond, Washington as the site of the PGA Tour Championship and the Experience at Koele on the island of Lanai, Hawaii as one of the best new resort courses in the world. In 1993, he was named as one of the Best in the West by Western Golf Links Magazine. At various times, Robinson designed courses have been ranked in the top five in Washington, Oregon, Nevada, New Mexico, Utah and Hawaii. He was well known as one of America’s most imaginative and innovative golf course architects and was been deemed the “king of waterscapes” whose ideas have resulted in some of the most beautiful and challenging courses showcasing golf at its finest throughout the world. For more information including a video convertation with Ted Robinson, please refer to the ASGCA architect’s gallery at http://golfarchitects.lib.msu.edu/robinsont/index.html.

The greatest challenge in design is to balance the strategic elements of the game in such a way as to maximize the rewards of playing for the greatest number of people. Courses that are fun, exciting, and consistently changing day by day offer the greatest allure of all.